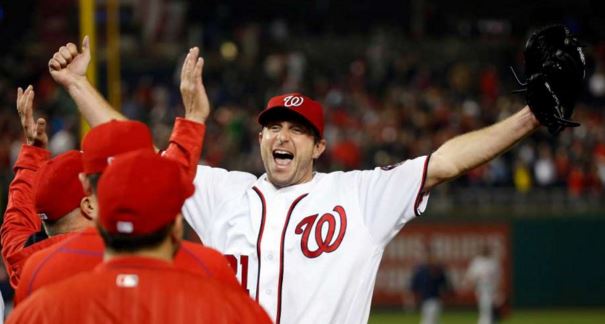 Since joining the Nationals after signing a $210 million contract, Scherzer has thrown two no-hitters. But after entering the much smaller 20-strikeout club, Scherzer was ecstatic.

“There’s something about 20. Tonight was an emotional game, facing a former team and all those guys I have so much respect for,” Scherzer said after pitching against the Tigers for the first time since leaving Detroit. “And so to have a game like this against that caliber of hitter on their side, it really puts a feather in my cap.”

Scherzer joined Roger Clemens (twice), Randy Johnson, and Kerry Wood as the only pitchers to strikeout 20 in a nine-inning game. The major league record for strikeouts in a game belongs to Tom Cheney, who struck out 21 batters in 16 innings for the Washington Senators against Baltimore in 1962.

“That’s some serious company,” Scherzer said. “It won’t sink in right now, but it’s an amazing accomplishment.”
In today’s game, when a pitchers pitch count reaches 100, managers often are inclined to take the pitcher out due to fear of overuse. But on Wednesday, Nationals manager Dusty Baker didn’t hesitate to keep his ace, who had thrown 106 pitches through the 8th, in the game.

“I knew there was a lot,” manager Dusty Baker said. “But when they put it on the board, I was like, ‘Oh, no.’ At that point in time, you know, how often do you have a chance to make history like that? We just have to watch him his next start.”

While he did give up two homers, one of the more impressive aspects of Scherzer’s start was that he didn’t walk a single hitter.

“That was one of the more dominant performances I’ve ever come across,” said Tigers manager Brad Ausmus, also an opponent during Wood’s 20-strikeout game and one of the two compiled by Clemens. “It wasn’t quite as dominant as Kerry Wood and it was more dominant than Clemens.”

Regardless of the level of dominance, there is no denying Scherzer’s place in history. Two no-hitters and a 20-strikeout game; Scherzer may very well be baseball’s Terminator.