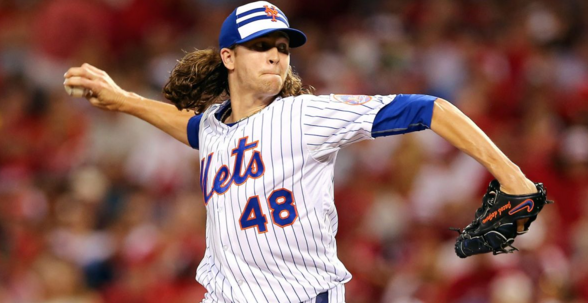 As of Sunday morning, the health of New York Mets right-hander Jacob deGrom’s newborn son had improved, according to manager Terry Collins.

Following the birth of his son, Jaxon Anthony, Monday night, the Mets placed deGrom on emergency leave Saturday because of health complications with the newborn.

“Last night I talked to him,” Collins said Sunday morning. “The baby is doing better. That was a good sign. I just told Jake he needs to get some rest and mix in a meal.”

After initially being scratched from his start last week due to right lat tightness, deGrom has progressed to throwing bullpen sessions with the intent to re-enter the rotation as soon as next weekend in Atlanta if his family situation allows.

“I’ve spoken to him every day,” Collins said Saturday. “He’s where you would expect him to be. He’s not sleeping much. We’re certainly rooting for him and [his wife] Stacey and the baby to hang in there. … It’s a real-life situation. Certainly we take the game of baseball very seriously. This changes a lot of things.”

Before the complications arose with his son, deGrom was expected to take his next turn in the rotation Tuesday in Philadelphia. In his only start of the season thus far, deGrom allowed one run in six innings against the Phillies.

The Mets have suggested the drop is not the result of injury, but likely due to last year’s heavy usage. However, fans will continue to worry until deGrom captures last year’s form.

While deGrom remains with his wife and son, Logan Verrett will make his second start of the season Tuesday in Philadelphia.