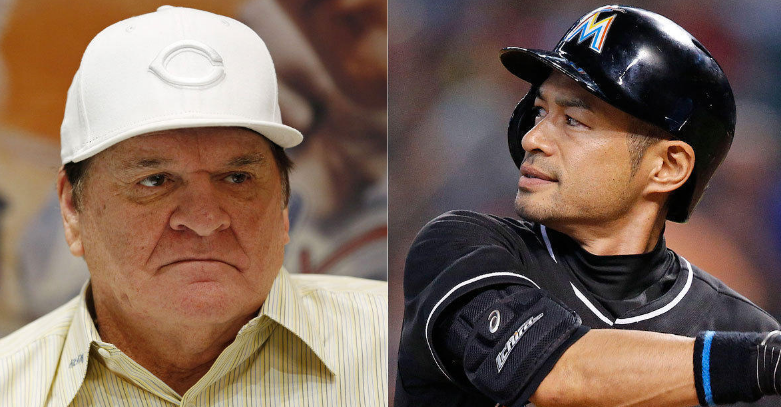 Upon signing with the Seattle Mariners in 2001, the left-handed hitting guru recorded 242 hits while capturing both the AL Rookie of the Year and AL MVP awards. Ichiro subsequently reached the 200-hit mark in his next nine seasons with the Mariners, establishing himself as one of the games greatest hitters ever.

Before the season ends, Ichiro will break the hallowed 3,000 hit mark, but the thought of Ichiro’s Japanese accomplishments being added to his MLB marks is too much for the former hit king, Pete Rose, to accept.

Never been shy regarding his opinions, Rose went on to demean the skill level in Japan’s professional league:

“It sounds like in Japan, they’re trying to make me the Hit Queen,” Rose told USA Today Sports earlier this week. “I’m not trying to take anything away from Ichiro — he’s had a Hall of Fame career — but the next thing you know, they’ll be counting his high school hits.”

The notoriously calm and respectful Ichiro was well aware of Rose’s comments, but opted to take the high road when responding.
“Obviously, I’ve heard of Pete Rose’s comments, and he wasn’t happy about what they are saying about this record,” Suzuki said. “To be honest, this wasn’t something that I was a making out as a goal. It was just kind of a weird situation to be in because of the combined total. For me, it’s not about the record, it’s about my teammates and the fans.”

Regardless of playing in Japan for the first half of his career, there is no debating Ichiro’s remarkable achievement in surpassing the all-time hit record. Ichiro’s current manager, Don Mattingly, paid great tribute to the legendary outfielder.

“He’s special. There are people in your life which you’re privileged with competing against and you get to manage against. He’s as good as there is.”