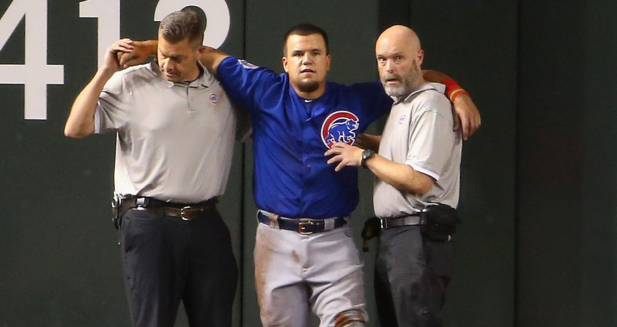 From the Curse of the Billy Goat, to the black cat, to Steve Bartman, and now Kyle Schwarber’s season already lost, nothing seems to ever go to plan with the Chicago Cubs.

Schwarber, Chicago’s starting left fielder, has full tears to the ACL and LCL in his left knee and will be out the rest of the season. After a scary collision with center fielder Dexter Fowler Thursday night in the Cubs’ win over Arizona, Schwarber initially seemed to be favoring his ankle:

An MRI, however, showed the tears in his knee in addition to the severely sprained ankle. Entering only his second year in the big leagues, the lefty powerhouse figured to be a big part of the World Series favorite Cubs’ push for glory. After hitting five home runs in the postseason last year, fans and manager Joe Maddon had high hopes for the blossoming star.

“A young man in his sophomore season in the big leagues,” Cubs manager Joe Maddon said Friday, “one of the most refreshing and talented in all of major league baseball. Now to be out for the rest of the season, it’s not easy.”

In only 71 regular season games last season, Schwarber slugged 15 home runs and contributed 43 RBIs. Before learning his sophomore season would be over after only three games, Schwarber remained hopeful the MRI wouldn’t show further damage.

While Schwarber will surely be missed, the Cubs have the depth to soften the blow of his loss. Jorge Soler will start Friday night in Arizona while Matt Szczur, Tommy La Stella, and possibly Kris Bryant, will also see time in left field this year.

Although there is talent in place to backup Schwarber, the loss of a key cog has not been lost on his teammates. “He’s going to be missed,” Cubs catcher David Ross said. “I mean there’s no sugarcoating. We love the guy. It’s a sad day here in our locker room.”