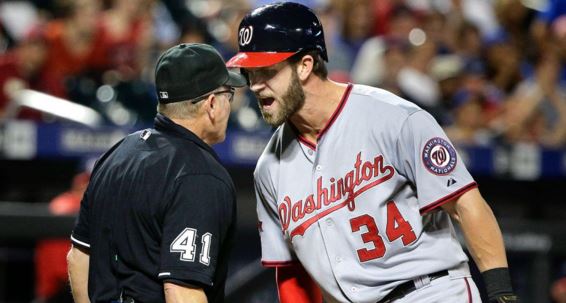 Once again, the defending NL MVP’s hot-temper got him in trouble on Monday night. Despite not even being in the batter’s box, Bryce Harper managed to get ejected from the game for arguing a call third strike on teammate Danny Espinosa.

According to MLB rules, when a player is ejected from the game, he must leave the dugout entirely. However, Harper ran onto the field minutes later when teammate Clint Robinson hit a walk-off home-run. As if that wasn’t bad enough, amid celebrating with teammates, Harper took his time on the field to curse out home-plate umpire Brian Knight.

When asked about a possible fine after the game, Harper coolly responded, “If I do, I do. I’ll pay it. Maybe [Knight will] get fined, too. So we’ll see.”

To Harper’s surprise though, in addition to an undisclosed fine, he was suspended for their game Wednesday night against the Detroit Tigers. However, much to the delight of Nationals fans, Harper has appealed the one-game suspension.

To commemorate last year’s MVP season, the Nationals are hosting “Bryce Harper MVP bobblehead night,” which would have been significantly more awkward if Harper weren’t in the lineup.

But with Major League Baseball forced to take time to process the appeal, everyone comes away happy. Except Jordan Zimmermann of course – the Tigers pitcher forced to face Harper Wednesday night.