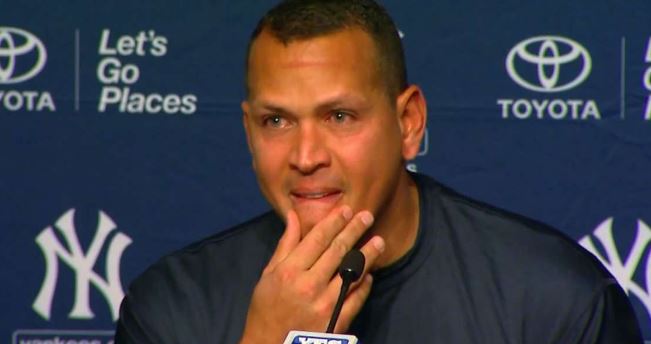 Just a year removed from a 33-home run season, Yankees designated hitter Alex Rodriguez is set to end his time with New York. A-Rod announced in a press conference on Sunday that the Yankees’ game on August 12 would be his last.

The team will release the 41-year old power hitter, simply absorbing his whopping $21 million payment due in 2017. While he won’t be swinging for the pinstripes, Rodriguez will stay with the team as a special advisor and instructor. It’s by no means ordinary, but comes as a solid move for both sides with next season being the last of A-Rod’s massive 10-year, $275 million contract.

In his news conference, the 21-year veteran was extremely emotional.

“This is a tough day,” Rodriguez said. “I love this game and I love this team. And today I’m saying goodbye to both.”

Rodriguez’s press conference serves as the latest indication of New York’s desire to plan for the future. Longtime first baseman Mark Teixeira announced that he will retire at season’s end, and the Yankees were sellers at the trade deadline, swapping stud relief pitchers Andrew Miller and Aroldis Chapman for a strong crop of prospects.

Rodriguez batted a measly .204 with 9 home runs this season, making it far from surprising to see the Yankees part ways with him. However, it’s important to note that Rodriguez didn’t use the word “retire” once during his press conference.

If not for a controversial stint with PED’s, Rodriquez would unquestionably be a first-ballot Hall of Famer. The 3-time MVP owns a career line of .295 with 696 homers and 2,804 RBI’s. He averaged over 31 homers per season, was a 14-time All Star and received 10 Silver Slugger Awards. He spent time with the Seattle Mariners and Texas Rangers before winning his lone World Series in 2009 with the Yankees.

In 2016, Rodriguez was nowhere near the player he once was though, spending most of the season riding the bench.

“We all want to keep playing forever,” Rodriguez said. “But it doesn’t work that way.”