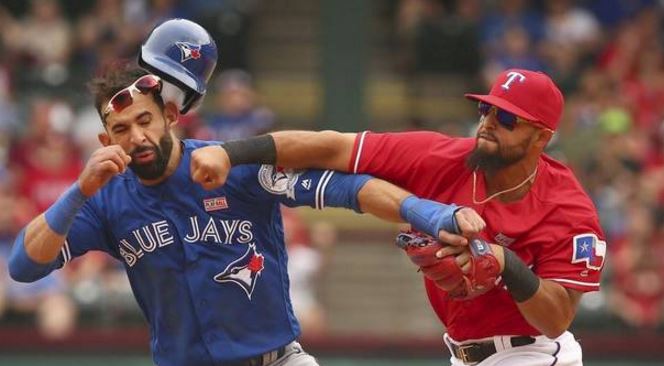 Things got out of control in Arlington, Texas on Sunday afternoon during a matchup between the Texas Rangers (22-16) and the Toronto Blue Jays (19-20). It all started when outfielder Joey Bautista was drilled by a Matt Bush fastball. On the next play, Bautista made a hard slide at Rangers second baseman Rougned Odor and madness ensued:

Odor shoved Bautista, then clocked him in the jaw with a strong right hook. Both benches cleared, leading to several ejections. Among those to get thrown out were Odor, Bautista, reigning MVP Josh Donaldson and reliever Jesse Chavez.

The Jays slugger said he was caught off-guard by Odor’s actions.

“I was pretty surprised,” Bautista said. “I mean, obviously, that’s the only reason that he got me, and he got me pretty good, so I have to give him that. It takes a little bit bigger man to knock me down.”

Although a fist fight wasn’t expected, Bautista can’t be too stunned by the Rangers’ actions. During last year’s ALDS, Bautista flipped his bat after a crucial home run off Texas reliever Sam Dyson – a serious sign of disrespect in the baseball world.

Texas, however, waited a long time to retaliate. In what was seemingly Bautista’s final at-bat of the series, the Rangers decided to plunk the 35-year old out of the Dominican Republic.

Odor, a 22-year old Venezuelan native, is expected to receive a suspension from the MLB. While the Rangers and Blue Jays don’t play again during the regular season, the teams are expected to compete for a playoff spot.

If they meet again in October, it will be must-see baseball.