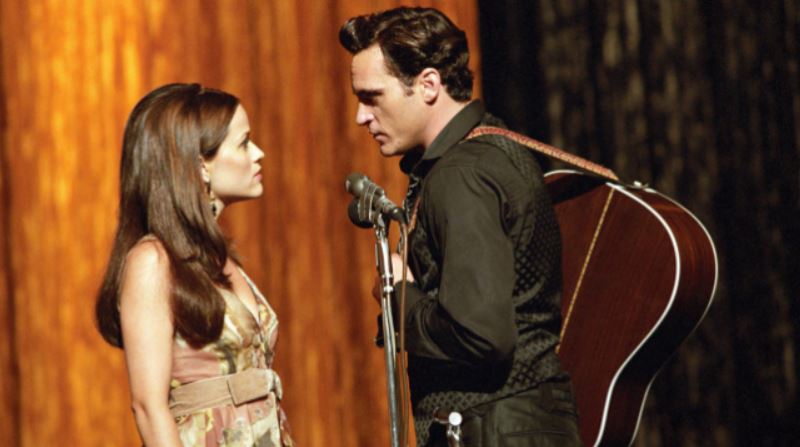 You can recognize that booming voice as soon as you hear it. What is there to say about Johnny Cash? Well, he sang like he meant it. He wasn’t trying to be fancy. He sang for the lonely old, the broken down, and the good hard-working men who just couldn’t seem to catch a break. James Mangold’s (Girl, Interrupted, 3:10 to Yuma) film with its perfect performances by Joaquin Phoenix and Reese Witherspoon depicts an epic portrayal of the man who chose to walk the line at any costs. He was going to sing and not give a damn at what anyone thought.

The film breaks down into three different sections of Johnny’s life. He came from a hardworking farm family in Kingsland, Arkansas. Like most southern folks, his early life was dominated by gospel and country music. An early tragedy in his life occurred when his older brother Jack died in a sawmill accident. His father constantly blamed him for the death of his brother — considering him a failure throughout most of his life. He bought his first guitar in Germany where he was stationed with the Air Force, and from there wrote his very first version of “Folsom Prison Blues.”

Although he tried many attempts to secure a “real job” when he returned from service to support his then-wife Vivian and his children, his heart always belonged to music. It was his audition for Sam Philips at Sun Records — the Tennessee recording studio that discovered the likes of Elvis and Jerry Lee Lewis — that ultimtely ignited the fire to Johnny’s career. His audition (in one of the best scenes in the film) consisted of singing a third-rate church hymn with a third-rate sound. It’s when Sam asks him to sing “somethin’ real” and “somethin’ different” that Johnny plays for him the Folsom track. As he nervously begins, he starts picking up tempo — allowing his band to follow his lead and find their iconic sound. They come in as losers and leave as Johnny Cash and The Tennessee Three.

During a series of incredible tour scenes, the audience is introduced to many characters making up much of Cash’s early life: Elvis (Tyler Hilton), Roy Orbison (Jonathon Rice), Waylon Jennings (his son, Shooter Jennings), “The Killer” Jerry Lee Lewis (Waylon Payne) and of course, the beautiful June Carter. She was and is country royalty. The Carter family, steered by Mother Maybelle, was the very first vocal group to become country music sensations. June is the firework of “Walk the Line” with boundless energy and strength. We’re told in the film that June “June-Bug” Carter learned to be funny onstage in order to hide the fact that she didn’t think she had a great singing voice. She effortlessly goes back and forth from her bubbly onstage persona to her down-to-earth personality off-stage. She has a hard time choosing the right men, and an even harder time keeping away from the one right in front of her. She knows he’s trouble, and continues to keep him at arm’s-length throughout most of her life — from the very beginning of his career to the drug and booze spiraled downfall that almost ended his life.

The most heartbreaking scene of the film shows Johnny onstage in the midst of overdosing. Having been rejected by June for his constant pill popping, he takes a larger dose than normal and collapses mid-performance. What is most harrowing is not the actual overdose, but his determination to go on stage knowing he shouldn’t. He demonstrates a desire to push through when he is clearly unable to — almost as if he can hear his dad’s voice telling him he’s no good. Many don’t know that June actually wrote “Ring of Fire” about her tumultuous relationship with Johnny during this time. The unconditional love of her and her family — coupled with his subsequent time in jail after getting busted is what finally drives him to kick the drug habit for good.

When broken down, the film is essentially about Johnny and June’s incredible love story with a lot of amazing music. Witherspoon’s portrayal as June Carter is astounding and full of great understanding and depth. As June matures throughout the film, she portrays her with so much vitality and honesty that the audience can’t help but empathize with her and her love for this broken man. Witherspoon’s portrayal of Carter even earned her an Academy Award for Best Actress. Phoenix is absolute perfection in this role. He works miracles in depicting both the sensitive man grasping for any ounce of love, as well as the rebel and defiant alter ego of “Cash.”

Both actors used their own vocals for the film’s soundtrack, and their chemistry together is beyond dynamic and palpable. Being an avid fan and knowing pretty much all of Johnny Cash’s albums, I was quite skeptical that the sound would not live up to his iconic tone. As I closed my eyes to listen, it became clear to me that Joaquin Phoenix’s voice was spot on—as June states, “steady like a train, sharp like a razor.”

This was Johnny Cash. 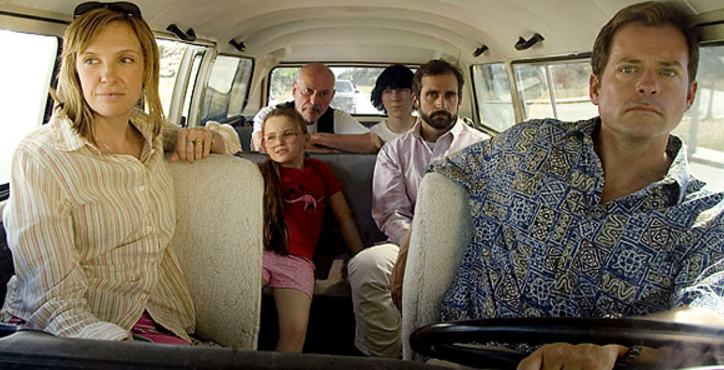