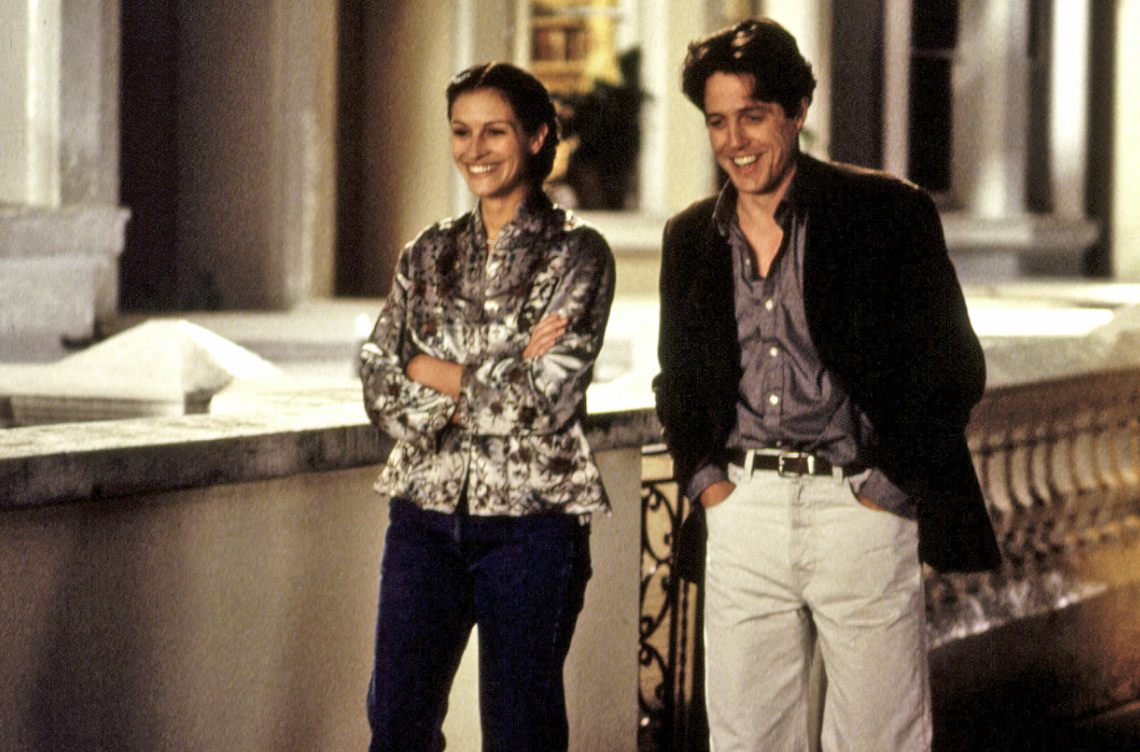 The moment we see Julia Roberts and Hugh Grant together on the screen, we want to see them snogging. However, a romantic comedy like Notting Hill is about delaying the inevitable.

After all, they live in two different worlds. Her character, Anna, is one of the most famous movie stars in the world. His character, William, runs a modest little travel book shop in London. It’s the perfect romantic comedy story line. We know they are designed to be together but we’re always quicker to figure it out than the characters themselves.

Notting Hill reassembles three of the key players from Four Weddings And A Funeral (1994): Grant, screenwriter Richard Curtis and producer Duncan Kenworthy. Notting Hill, while falling just short of the Four Weddings benchmark, still makes for solid, crowd-pleasing entertainment. It includes a delightful array of one-liners, quirky sidekicks, and a central couple who fall in and out of love with alarming speed. Grant’s character lives in his former marital home with a rodent-like half-breed called Spike (Twin Town’s Ifans on top, scene-stealing form).

Anna wanders into William’s bookstore one day. She enjoyed the way he handles a would-be shoplifter, and their eyes — as they say — meet. He tries to keep his cool, although he’s as agog as if she were, well, Julia Roberts. She acknowledges his unspoken adoration and is grateful that it remains unspoken. Although there’s enough electricity between them to make their hair stand on end, she leaves. But of course, they must meet again. The next time they meet, William accidentally spills orange juice all over her which prompts her to go to his house to change. Anna is disarmed, grateful; She offers a spontaneous kiss and, later, an invitation for a drink at her hotel. The hotel scene is a gem. William arrives during a press junket for Anna’s new film and pretends to be a journalist from an obscure magazine entitled Horse and Hound. This scene allows Curtis to take a series of wicked jabs at the publicity machine that helps Anna command $15 million a film.

Things get even funnier when Anna moves into William’s turf. She accepts an invitation to accompany William to a birthday party for his ditzy sister Honey (the late Emma Chambers) at the home of their friends Max (Tim McInnerny) and Bella (Gina McKee). Bella is a former flame of William’s who is now sadly confined to a wheelchair. McKee’s sharp, touching performance stands in contrast to the more obvious hilarity offered by Hugh Bonneville as Bernie (a financial type who is clueless about Anna’s identity) and especially by Ifans. These friends and others, like a restaurant owner, represent a salt-of-the-earth alternative to Anna’s show-biz satellites. The birthday party is the film’s laugh highlight, as William’s friends struggle to retain their cool in the presence of a star and then scream like rabid groupies the second she leaves the house. It’s one of the best scenes in the film.

Anna is seen not simply as a desirable woman, but as a complicated one. Her life doesn’t make it easy for her to be happy. There are moments in the middle of this comedy that bring the audience to that kind of hushed silence you get when truths are told. One comes when Roberts looks into the camera and predicts Anna’s future: “One day my looks will go, and I’ll be a sad middle-aged woman who looks like someone who was famous for a while.” To be beautiful and famous is, as the movie argues, to risk losing ordinary human happiness. The birthday party she attends with William could arguably be the first normal evening she’s had in years.

There are other moments when they are basically just a boy and a girl, hand in hand, wandering at night through London. And then her “real life” kicks in, complete with a movie star boyfriend (Alec Baldwin) who thinks William is a room service attendant. The movie is bright, the dialogue has wit and intelligence, and Roberts and Grant are very easy to like.

By the end, as much as we’re aware of the ancient story machinery groaning away below deck, we’re smiling. Grant has matured from a bumbling, pompous buffoon into the kind of leading man you actually end up rooting for. Roberts, meanwhile, is so radiant as the film star trying desperately to convince her new beau she’s “just a girl standing in front of a girl asking her to love him.” It’s as if this was the role she was born to play.

If Curtis’ sharply funny script has a flaw, it comes in trying to make a serious point about media intrusion and the boundaries of privacy. Still, it doesn’t detract from the feel good element of the movie, and the scintillating chemistry between Roberts and Grant. In a time of digital glitz and superhero films, Notting Hill reminds us of the simple pleasures we’ve been missing.