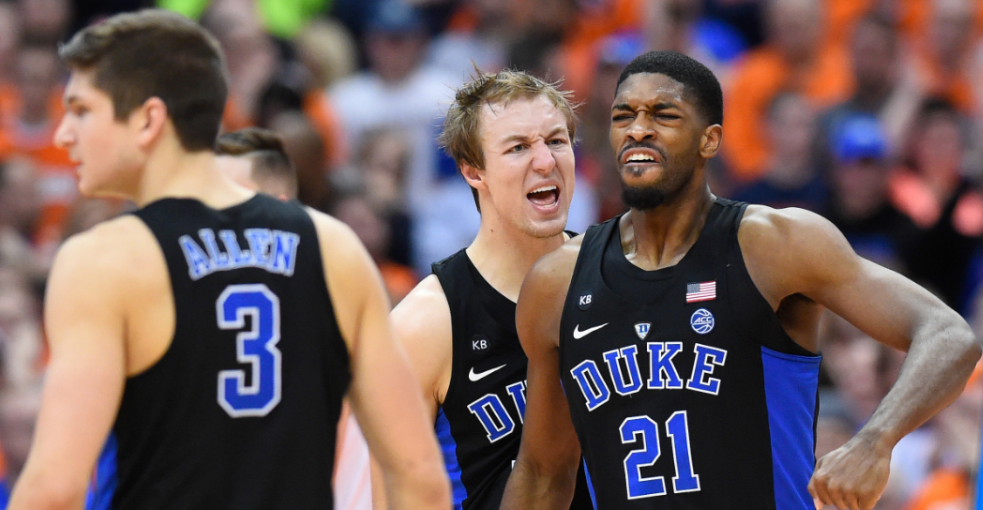 Despite a 68-65 buzzer-beater loss to Syracuse on Wednesday night, the Duke Blue Devils are starting to click at the right time. After a disappointing 2015-2016 season that was marred by Grayson Allen tripping scandals, Duke brought in the #1 recruiting class and an excellent returning group led by the aforementioned Allen and swingman Luke Kennard. The result? Duke entered the 2016-2017 season ranked #1 in the nation.

Over the past few seasons, Coach K has evolved his program to handle the one and done rule. He realized that to be competitive year to year, Duke needed the top freshman in the country, but he also had to mix in experienced upperclassmen.

This year’s roster is the pinnacle of this new strategy.

Allen and Kennard would be the focal point of the returning players, but veteran leaders Amile Jefferson and Matt Jones have been just as important. Jefferson returned to Durham for his fifth season after being granted a medical redshirt last year. Both Jones and Jefferson were a part of Duke’s national championship team in 2014-2015 and have been steadying forces for this young Blue Devils squad.

Tatum and Giles were joined by other talented recruits in center Marques Bolden and guard Frank Jackson. However, Giles and Tatum would not be available at the start of the season due to injuries. Giles, the number one recruit according to ESPN, was still recovering from an ACL injury he suffered in high school, and Tatum was recovering from a foot injury suffered in training camp.

The Blue Devils looked just fine in their first two games before a meeting with the Kansas Jayhawks. Kansas walked away with a 77-75 win, thanks to a buzzer beater from Naismith Player of the year candidate Frank Mason III. Sure, fans could have overreacted to an early season loss, but the Jayhawks have a talented roster and a loss in November means far less than a loss in March.

Following the defeat, Duke responded as many thought they would: rattling off a nine game winning streak, which saw Kennard step into the national spotlight as Tatum and Giles joined the rotation. Then, Duke played Elon and the wheels came off. Late in the first half, Allen was seen blatantly tripping an Elon player, which resulted in Allen lashing out on the bench and ultimately having to be restrained by assistant coaches. Duke eventually won the game, but it started a series of events that led the Blue Devils to one of their worst starts in the ACC in quite some time.

Allen was suspended “indefinitely,” as Coach K issued a statement that Allen knew he was in the wrong and that his star player was working on getting better. Things only got worse for the Blue Devils, who opened ACC play with a humiliating loss to Virginia Tech. Without Allen, the Blue Devils looked lost on offense and allowed Virginia Tech to shoot 55% for the game. After the game, Coach K announced he would be taking time off for back surgery and rumors started swirling about the program.

Speculation only got worse after Duke went 1-3 during a four-game stretch, forcing Coach K to call a team meeting at his house. Coach K locked his players out of the locker room and forbade them from wearing team gear on campus. The move by Coach K seemed strange from the outside, but it got something clicking for his team. Duke went on a seven-game winning streak, which included wins over Notre Dame and archrival North Carolina.

Lost in all of the drama on and off the court is the fact that when the entire roster is healthy, Duke has only lost one game. Tatum and Giles missed the first part of the season and since coming into the starting lineup, Tatum has looked like the prospect everyone thought he would be. In ACC play, the 6-foot-8 freshman is averaging 17 points and 7.3 rebounds per game while shooting 42% from behind the arc. Giles is still adjusting to the speed of D1 basketball, and looks to be trusting his repaired knee more and more. The 6-foot-10 freshman has tremendous skill in the low post and his work ethic on both sides of the floor has shown.

Kennard and Allen were always projected to be the main scorers for the Blue Devils, but Kennard has elevated his game to an unexpectedly incredibly level. The sophomore is averaging 20.1 points and 5.2 rebounds per game while shooting 46% from three. He has carried the Blue Devils to multiple wins this season and is in the running for ACC player of the year. Despite all of the distractions and controversies, Allen is averaging 14 points per game since his suspension, including a masterful 25-point performance against North Carolina.

With just three games remaining in ACC play, Duke sits tied for second in the ACC behind only rival North Carolina – who they play in the final game of the season. This three-game stretch is the perfect test for a Blue Devils team that is finally healthy.

Duke still has one of the most talented rosters in the entire country and has veteran leadership that knows what it takes to win an NCAA title. Come March, the Blue Devils may just be the scariest team in the country.