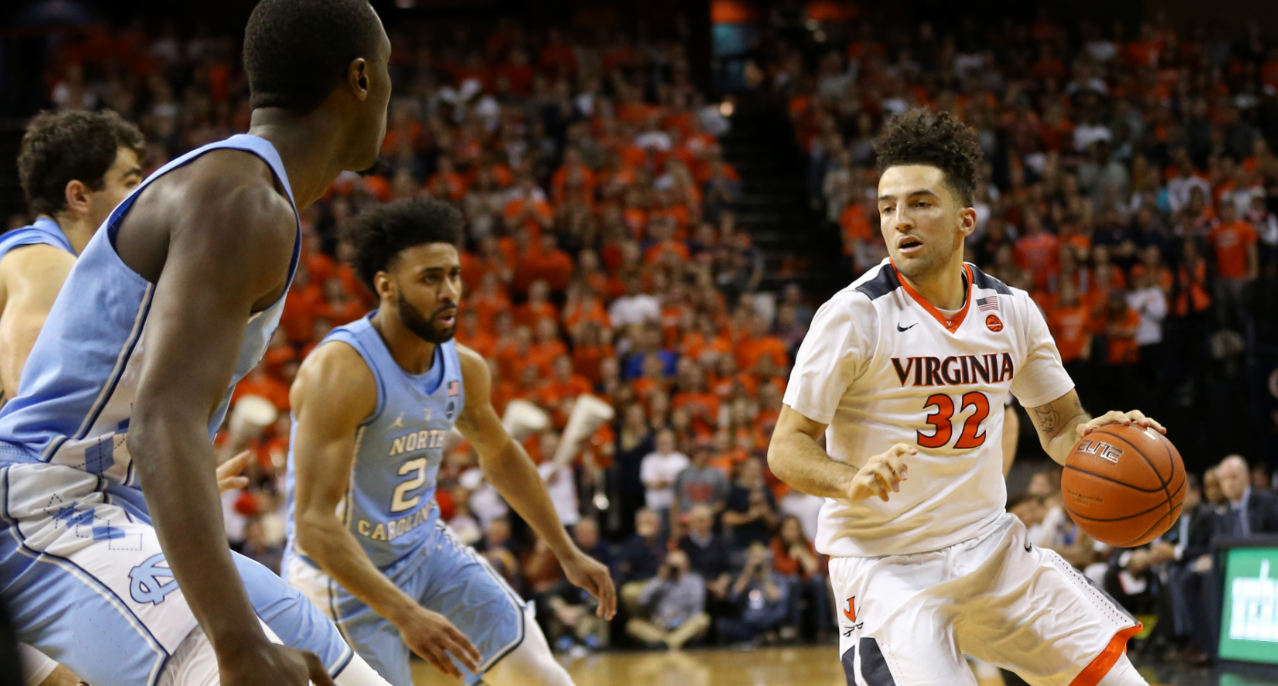 With March Madness just a few weeks away, the college basketball season is ramping up as teams are doing whatever they can to solidify their spot in the Big Dance. Monday night was highlighted by a pair of big games in the two best conferences in the nation, with Virginia besting North Carolina in an ACC showdown and the Baylor Bears winning a tightly contested game over the West Virginia Mountaineers. Both winners on Monday entered the game as home “underdogs” (ranked lower in the AP poll), but gutted out victories that could have heavy implications in conference seeding.

Virginia did what they do best, holding one of the nation’s more efficient offenses to just 35 percent from the field and a lowly 4 for 16 from beyond the arc. Carolina’s top scorer, Justin Jackson, was held to just 7 points, only the third time all season Jackson has failed to reach double digit scoring.

On the offensive end, it was the three ball that gave the Cavaliers the edge. After only hitting two triples in their last meeting at Chapel Hill, Virginia exploded for 10 three-point bombs. We all know about senior London Perrantes’ propensity to make clutch buckets, but it was the freshman Kyle Guy that recorded a team-high 17 points off of five triples that was the biggest catalyst in Virginia’s victory.

The Tar Heels expect more out of Jackson, who saw a magnificent run of 19 consecutive double digit scoring games come to an end on Monday. If they want any chance in making an ACC tourney run, they’ll need Jackson playing an at All-American level, and they’ll need Joel Berry and Isaiah Hicks to contribute as well – the latter fouled out in just 19 minutes of play last night.

Over in Waco, the Baylor Bears avenged the January drubbing from the hands of West Virginia by holding the Mountaineers to just 37 percent from the field. The Bears desperately needed this win, after losing three of their last four. It was not all that long ago this team was ranked number one in the nation, and since then, Baylor has lost a pair of close games against Kansas and a trio of losses to Iowa State, Kansas State and Texas Tech. The Bears have not been a good road team this year – a trait that is imperative to neutral site tournament success. Jonathan Motley has been their workhorse all year, and he’ll have to be at his very best with the season coming to a close.

The Mountaineers have been a tough team to peg all season long. Gritty wins over Kansas and Baylor earlier in the year seem like a distant memory with the fresh taste of ugly overtime losses to Texas Tech and Oklahoma. Their hyper-aggressive defense has been the calling card of the team for years, but in the tournament, it’s difficult to rely on layups and run outs as your primary offense. Their half-court offense will be tested by the more disciplined teams, and they’ll need to show that they have enough shot making ability in those instances to do any damage.

The action around the nation is revving up, and the only thing we know for certain is that the next month will be filled with exciting college basketball.