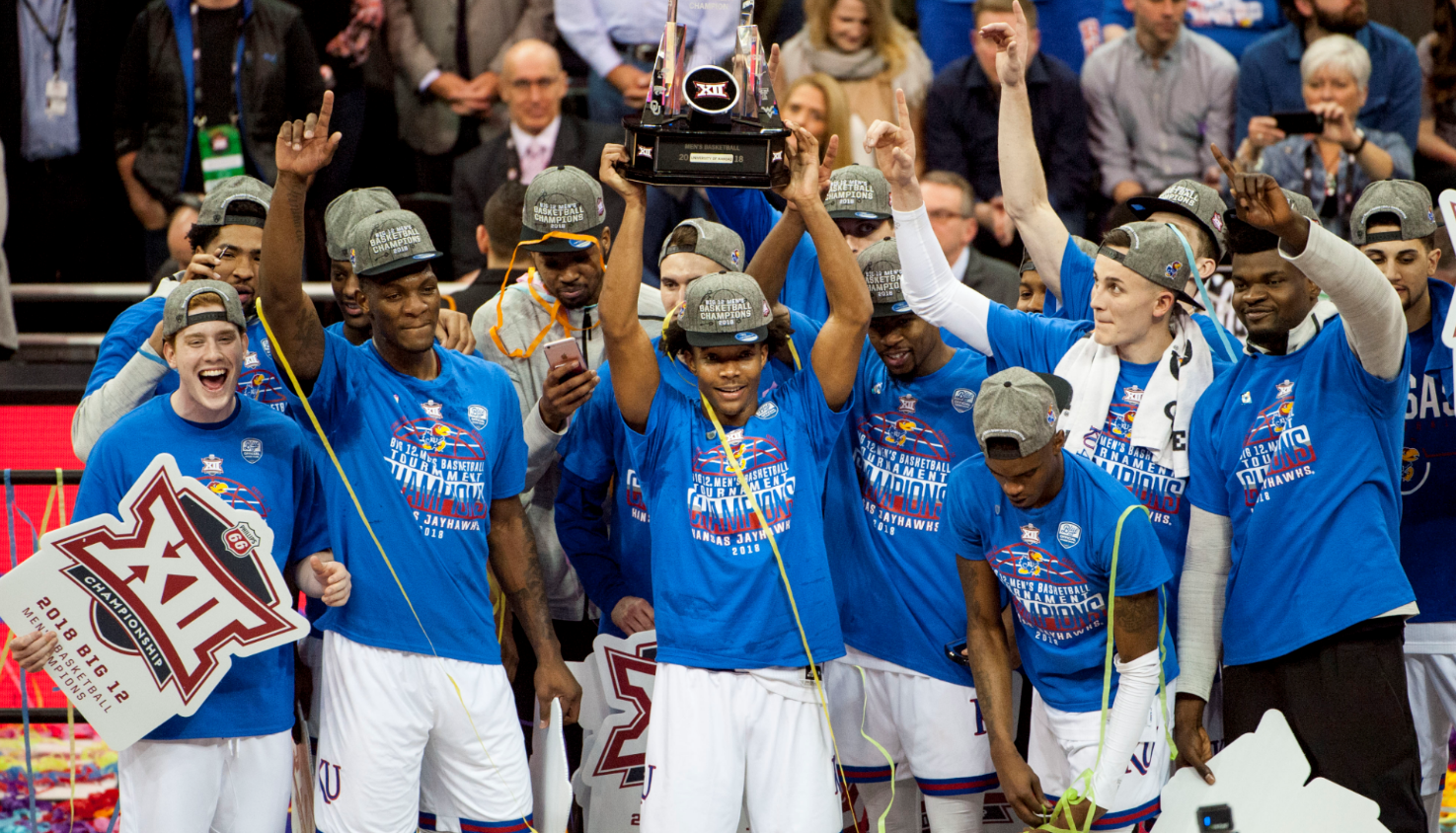 Penn went through an Academic Triathlon of squads (Brown, Yale, Harvard) en route to securing a victory in the second-ever Ivy League Conference Tournament. The Quakers are 19-4 since losing by 28 to Villanova back in November. They hang their hat on the defensive end, where they rank ninth in the country in Defensive Rating and second in opponent three-point percentage.

That last tidbit will determine this David vs. Goliath battle. The Jayhawks depend on the three-point shot more than any top-ranked team not named Villanova. They were scorching-hot from beyond the arc in the Big 12 Tournament, knocking down 34 triples through three games. When Malik Newman and Svi Mykhailiuk get it going from that range, this team becomes near impossible to stop.

It’s an interesting match-up for the three-point battle alone, but Bill Self isn’t going to be the first coach that goes down to a No. 16 seed. Kansas wins handily.

This Big East-ACC showdown pits two teams who finished with the third best record in their respective conference against one another. Seton Hall’s continued excellence was enough for the committee to overlook a four-game skid in February, and instead put stock in their impressive out-of-conference résumé (and their four combined wins over Butler and Providence). The Wolfpack clinched their spot by having arguably the strongest trio of victories by any team in the country (Arizona, Duke, at North Carolina).

The two teams are near mirror images of each other. Both have a healthy collection of youth and experience. Both teams are fairly efficient on the offensive end (64th and 35th in Offensive Rating). Neither team shoots a lot of threes, but both play at a faster pace. Even on the defensive end, the two teams are separated by less than a point in terms of Defensive Rating (102.3 vs. 103.0).

The deciding factor here will be Seton Hall’s advantage on the defensive glass. The Wolfpack are actually a pretty good offensive rebounding team. They ranked 4th in the ACC in Offensive Rebound Percentage — trailing Duke and North Carolina who happen to rank first and second in the nation in this category. On the other end though, NC State isn’t nearly as potent at cleaning the glass. They’re second to last in the ACC in Defensive Rebound Percentage, and would rank seventh out of seven in Total Rebound Percentage for teams including North Carolina in their school name (University of, Greensboro, Central, Asheville, Wilmington, A&T, and State).

You can’t expect to win in the tournament if you’re constantly giving up extra possessions to a seasoned team like the Pirates. Seton Hall takes it.

The last game of the Round of 64 could end up being a major bracket buster. The Tigers of Clemson enter the tournament after being narrowly defeated by eventual ACC Tournament Champion Virginia, while New Mexico State just finished beating down the WAC and are winners of 22 of their last 25 games.

The Aggies certainly don’t have the strength of schedule that stacks up with Clemson, but let’s not sell them short here. They tested the Atlantic Coast waters when they defeated Miami two days before Christmas, and beat another tournament team in Davidson the day before.

Led by rangy wings Zach Lofton and Jemerrio Jones, New Mexico State owns one of the nation’s stingiest defensive clubs. Their absurd 90.7 Defensive Rating was only bested by the top two seeds in the South Region — Cincinnati and Virginia. They also don’t allow any second chance opportunities. Opponents grab just 22.7-percent of all available offensive rebounds when playing the Aggies — good for 12th in the country.

Clemson hasn’t been too shabby either on the defensive end. The Tigers own the second best Defensive Rating of all ACC teams, and are holding opponents to just 65.8 points per game this year.

But the Aggies are entering the tourney on a hotter streak after blitzing Grand Canyon University in the WAC Tournament Final. Clemson has had one convincing win since the start of February, and are even more susceptible to poor shooting nights with their most efficient scorer — Donte Grantham — out for the season.

Ending the Round of 64 with an upset seems fitting. New Mexico State wins.

Auburn enters the NCAA Tournament as one of the feel-good stories of the college basketball season. Not many would have pegged the traditional football powerhouse to be here at this point in the season, but here we are as the Tigers are set to make their first tourney appearance since 2003.

Losing sophomore forward Anfernee McLemore was a tough blow, but there’s still plenty to like on this roster. Mustapha Heron and Bryce Brown are dynamic scorers that can fill it up from anywhere on the floor. Jared Harper complements both players well with his innate ability to facilitate and get others involved.

Charleston certainly won’t be a cakewalk, though. The Colonial Athletic champions score at a high level (36th in Offensive Rating), and almost never turn the ball over (7th in Turnover Percentage). Anytime you have three players that average over 17 points per game, you’re going to have a chance.

Picking an upset here is incredibly enticing, but the Tigers are well coached and have the pedigree. Auburn squeaks by in a nail-biter.

Whichever team comes out on top in Wednesday’s play-in game will have their hands full with the Horned Frogs. TCU puts up 83 points per game, good for 19th in the nation and second in the hyper-competitive Big 12. Their scoring output is due in large part to their potency from three, where TCU converts 40-percent of their attempts. They have the ability to put five legit shooters on the court at once, forcing defenses to be completely engaged at all times.

Arizona State and Syracuse have taken near opposite routes to the NCAA Tournament. Formerly ranked as high as No. 3 in the Coaches Poll, the Sun Devils fell apart during Pac-12 play, but stayed in the field because of their monumental wins over Kansas and Xavier to begin the year. Syracuse always seems to be on the bubble, as Jim Boeheim will try to recreate the Orange’s 2016 Tournament run when they made the Final Four as a 10-seed.

On paper, Syracuse holds a slight edge over Arizona State in terms of their match-up and in potentially toppling TCU. Their zone defense becomes increasingly difficult to game-plan for when the opponent only has two days’ notice.

Bucknell is exactly the type of double-digit seed that embodies the NCAA Tournament. They’re a smaller school that plays an appealing brand of basketball and has enough top talent to hang with the nation’s best. In an alternate tournament-verse, the Bison could string together a few upset victories en route to the Sweet 16.

Unfortunately, Sparty stands in the way of that Cinderella run. Michigan State is about as upset-proof as it gets. They’re well coached, hit outside shots, don’t turn the ball over, and have elite size that gives them a huge edge on the boards.

The Bison won’t be slaying any giants this year. Spartans win easily.

Oh, how the mighty have fallen. Trae Young and the Sooners quickly became college basketball’s darling to begin the season. The sharpshooting guard led Oklahoma to a 12-1 start, and led the nation in both scoring and assists in the process.

Since then, Oklahoam has been anything but impressive. They’re 6-12 since that start, and Young has struggled with his efficiency. He remains a polarizing player that can get hot at any moment, but the Sooners aren’t nearly as intimidating as they once were.

Rhode Island enters as an at-large team following their one-point defeat to Davidson in the Atlantic 10 Conference Championship game. The Rams like to get up and down the court and launch threes. They start four guards — including marksman Jared Terrell and the versatile E.C. Matthews.

Based on their entire body of work, the Rams own a slight advantage. They enjoyed one of the nation’s longest winning streaks when they strung off 15 in a row from December to February. Rhode Island was also far more competitive in their conference than the Sooners were. But Oklahoma has legit star power in Young, and the Rams haven’t seen anything like him this year.

If points are your thing, then this is the game to tune into. The two schools combine for just under 165 points per game. The Blue Devils do it by securing second chances (No. 1 in offensive rebounding), and scoring efficiently at all levels. The Gaels get it done by utilizing a balanced attack that features seven players that can score the ball at a reasonable clip.

Iona truly has drawn the short end of the stick with their tournament draws. Since blowing a 25-point lead to BYU in a First Four match-up back in 2012, the Gaels have had to face Ohio State, Iowa State and Oregon in their last three tournament appearances. Needless to say, they went 0-for-3 in those match-ups, and it’s looking like another loss will be added to that résumé.

Bet the over, and pencil in Duke for the next round.