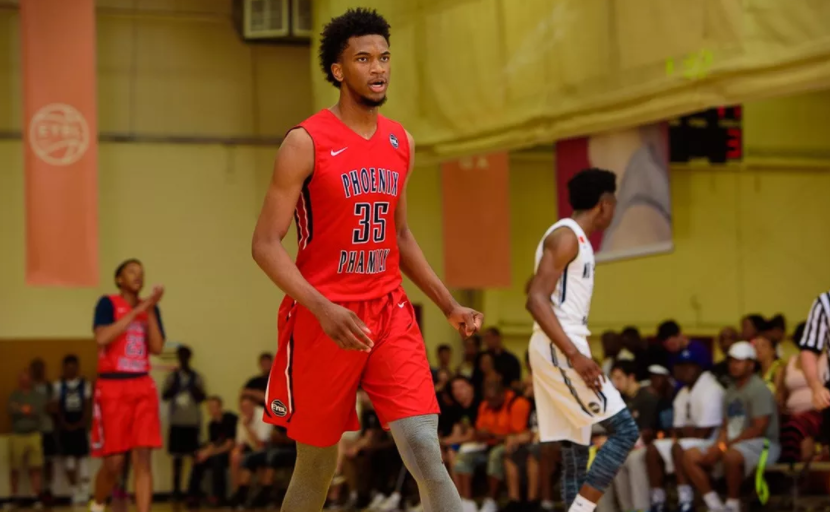 At 11:00 p.m. ET on Monday evening, the College Basketball world may see a seismic shift as it pertains to next year’s National Championship race.

Marvin Bagley III — considered to be the best high school prospect since LeBron James — will announce his college decision live on SportsCenter. Though technically a junior, Bagley III will also comment on the rumors surrounding a possible reclassification. Should this scenario ensue, he’d abandon one more year of high school play in favor of immediate enrollment at a university. His eventually journey to the NBA would then be expedited even further.

It appears to be a three-horse race for Bagley III’s services. The field at this point in time includes Duke, UCLA, and USC. Hailing from the greater Los Angeles area (though originally from Phoenix), Bagley III has been a fixture within the AAU scene for quite some time. The 6-foot-11 forward has range extending beyond the three-point line. He possesses a myriad of post moves around the basket, and also has surprisingly good ball-handling skills for a player his size. In terms of a comparison, Bagley III resembles a young Lamar Odom with a Kevin Garnett-like build. There’s no questioning his skill on the offensive end — nor is there any worry on his combination of athleticism and defensive potential.

This summer, Bagley III has been cutting his teeth in the vaunted Drew League. Not only has Bagley III been holding his own during these open run periods, but he’s also been dominant in spurts. From a competition standpoint, he’s gone up against the likes of James Harden, Chris Paul, DeMar DeRozan, Julius Randle, Andre Drummond, Lou Williams, and a host of other NBA players. In fact, Bagley III dropped 32 points and 12 rebounds in a victory over DeRozan’s team this past July.

There’s no question that Bagley III is a transcendent talent. Many believe he’s absolutely perfect for today’s NBA. Bagley III’s positional versatility is truly spectacular — as is his ability to impact the game in a number of ways. Though it’s unlikely Bagley continues to participate on the high school level, there are those wondering if he’d opt to play overseas for a year before entering the NBA. It’s certainly a possibility at this point.

However for the sake of interest, let us assume he will play on the collegiate level. The top three contenders all have talented teams returning in 2017. USC is by far the most experienced of the bunch — as it brings back virtually its entire roster from last year’s 26-win team. The Trojans’ top-seven scorers from 2016 comprise the bulk of this year’s group — including all-conference performers Bennie Boatwright and Chimezie Metu. The guard depth on the team is spectacular, as Jordan McLaughlin, Elijah Stewart, De’Anthony Melton, and Jonah Mathews can all fill it up. Duly, the team will have former Louisville transfer Shaqquan Aaron, recent addition Derryck Thornton Jr. (a transfer from Duke), and a McDonald’s All-American in Charles O’Bannon Jr.

The Blue Devils lost a ton from last season’s crew (Amile Jefferson, Luke Kennard, Frank Jackson, Harry Giles, Matt Jones, Jayson Tatum, Chase Jeter). With that said, Grayson Allen decided to stick around in order to boost his draft stock and trip even more players in 2017 (we’re only joking, Mr. Allen). As Coach K often does, the team reloaded with studs from the high school ranks. Point guard Trevon Duval will instantly be given the keys to the proverbial car. Shooting guard Gary Trent Jr. is a terrific scorer, and center Wendell Carter is both crafty and lethal on the block.

As for the Bruins, head coach Steve Alford was given the unenviable task of replacing the two-headed monster of Lonzo Ball and T.J. Leaf. The Bruins also lost Bryce Alford, Isaac Hamilton, and Ike Anigbogu from the 2016 roster. Fortunately for the Bruins, center Thomas Welsh and guard Aaron Holiday decided to stay in school. UCLA also signed one of the top recruiting classes in the entire country. The six-man class is buoyed by 5-star talents Jaylen Hands and Kris Wilkes. Cody Riley and Jalen Hill also add some size up front. In short, this will be the deepest and most athletic team in Alford’s tenure.

The addition of Bagley III for any of these programs would be immense. Duke’s team would be freshmen-heavy, but still ridiculously gifted. USC would likely be the most complete team in the entire country with Bagley III in tow. On the other side of town, UCLA would be the squad with the most upside in the entire country. It’s a team short on experience, but absolutely loaded with future NBA players.

Bagley III does come from a Nike upbringing — which could favor Duke and USC. Bagley III’s father also has family in the Durham area. At this point, the Trojans do not have a scholarship available — though one would have to guess they’d make room if need be. While UCLA is an Under Armour institution, assistant coach David Grace has a longstanding relationship with the Bagley family dating back to their days in the state of Arizona. Couple that with the fact Bagley III just recently visited Westwood on an official visit, and the Bruins appear to have some serious momentum heading into Monday evening.

Image Source: A Sea of Blue