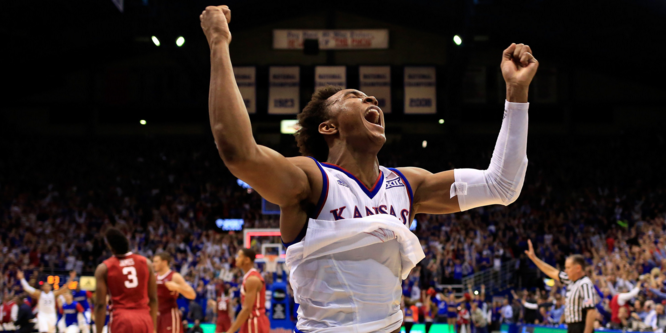 It’s only Week 9 of college basketball, and four different teams have already held the No. 1 spot in the AP Top 25 this season. North Carolina, Kentucky and Michigan State each lost to unranked opponents, paving the way for Bill Self and the Kansas Jayhawks to take the top spot.

The Jayhawks’ first day of the season as the No. 1 team in the country already provided quite possibly the game of the year. Taking on the No. 2 Oklahoma Sooners, the Big-12 powerhouses competed in an instant classic.

With Big-12 and national supremacy on the line, the two schools needed three overtimes to determine a winner. The Jayhawks prevailed by a score of 109-106 in front of their home crowd, but it was an immediate reminder that every team is vulnerable.

These two teams will meet again in February when Kansas heads to Oklahoma, which already looks like the best game of the remaining college basketball season.

Unlike previous seasons, no school has clearly asserted itself as “the team to beat.” Kentucky, Duke and North Carolina have each lost twice, Providence and Xavier are currently in the top 10, and SMU and South Carolina are the only two schools who remain unbeaten.

Clearly, there’s plenty of craziness to sort out before season’s end. If No. 1 Kansas vs. No. 2 Oklahoma served as any indication of what’s to come; it’s that the term “March Madness” is no longer applicable.

This season, college basketball will be Multi-Month Madness.