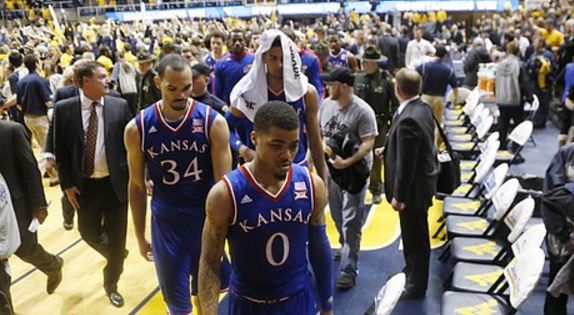 The Kansas Jayhawks became the fourth team this season to fall as the No. 1 team in the country, losing to the West Virginia Mountaineers 74-63. Holding the top spot for two weeks, the Jayhawks quickly reminded college basketball fans that no one is safe atop the AP Poll.

It was the third time in the past four years that the Mountaineers knocked off the Jayhawks on their home floor. Despite shooting an unimpressive 33.3 percent from the field, West Virginia got to the free throw line an astounding 47 times to bring home the victory.

Led by Devin Williams’ 17 points and Jaysean Paige’s 26, West Virginia dominated the game from start to finish. While the game was by no means pretty, it was the Mountaineers’ tenacity on the defensive end that earned them the win.

Bob Huggins’ squad made life miserable for the Jayhawks, who were unable to find any sort of offensive rhythm. Committing a season-high 22 turnovers, the normally calm and experienced Jayhawks looked baffled throughout the game.

The lone bright spot for Kansas was forward Perry Ellis, who scored 21 points and pulled down 7 rebounds. Ellis continues to make a strong case for Naismith Player of the Year honors, as it will likely come down to him and Big-12 foe Buddy Hield.

Floor general Frank Mason III had his worst game of the season, handing out 2 assists while committing 7 turnovers in the process. Wayne Selden Jr. also added 6 turnovers of his own, as the Kansas backcourt proved unable to handle West Virginia’s pressure.

It’s still early in the college basketball season, but if Kansas’ first four conference games are any indication, Big-12 (and national) supremacy is going to be an absolute war.