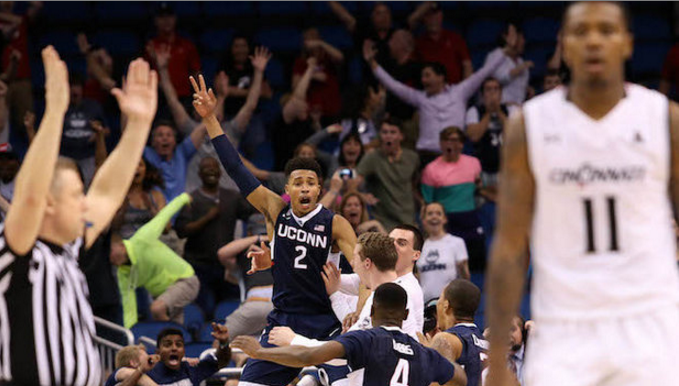 The heavily anticipated brackets don’t come out until Sunday, meaning “bubble” teams only have 48 more hours to prove they are worthy of making the tournament. While some teams have failed to live up to expectations, no one has capitalized on the opportunity more than the Connecticut Huskies.

Finishing fifth in the surprisingly strong American Athletic Conference this season, UConn had a chance to bolster its tournament resume taking on the Cincinnati Bearcats on Friday. In what might prove to be the craziest game we will see all of March, the Huskies won the quadruple overtime thriller 104-97.

The Huskies missed the tournament last season after winning it all as a No. 7 seed in 2014, and many believe this win will catapult them into the tournament field. But like most quadruple overtime games, this one featured some unforgettable moments.

In triple overtime, Cincinnati’s Kevin Johnson hit a three with 0.8 seconds left to go up 88-85, only to have Connecticut’s Jalen Adams hit a 60-footer at the buzzer to extend the game.

It was the kind of moment that has almost become the norm for UConn – a program that has made two magical and unlikely championship runs in the past five years.

March has officially begun, and who better than the Huskies to remind you that the madness is just getting started?